A man who allegedly claimed to be an Islamic prophet and tricked his male followers into allowing him to have sex with their wives and daughters has been arrested, Indonesian police said Friday.

The 48-year-old was detained on the island of Borneo after several followers reported he had told them to pay him money or organise sexual relations with relatives to purify them of their sins, a police spokesman said.

“According to the followers’ reports, if they can’t afford to pay the money, they have to let their wives or daughters sleep with him as an alternate way to go to heaven,” Kutai Timur district police spokesman Ketut Cakri told AFP. 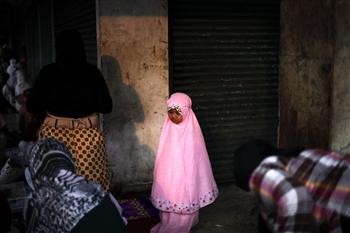 “We believe the man has slept with several of his followers’ wives and daughters, and has received money as well,” Cakri said, adding that he did not know if the women had consented to sex or if the man had any female followers.

He had spread “deviant” Islamic teachings through his cult for at least five years, Cakri said, and could be jailed for fraud and blasphemy in the world’s biggest Muslim-majority country.

“We don’t know the exact number of followers or victims yet, but the police investigation is still ongoing. We are digging for more information from him and his followers,” Cakri said.